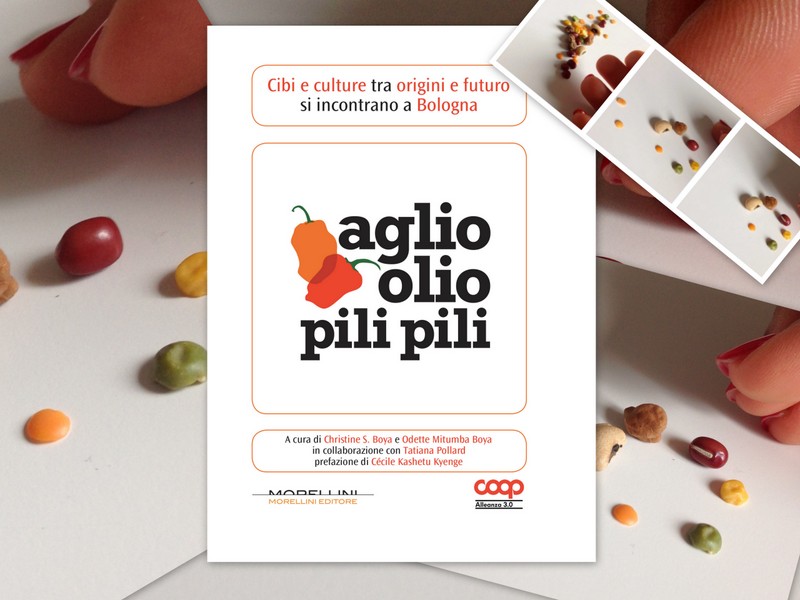 “Respectful unification of tradition with new elements from far away can bring great innovation at the table and to society.”

Three very interesting personalities in this project. How did all begin and why have you all decided to start this path together?

This journey kicked off two years ago as a result of the brainstorming of three women who have lived in Bologna for more than 10 years — me, my sister Christine and our friend Tatiana. We have come together to celebrate the connections (Incontri) between our land or lands of origin and the place we call home today, Bologna.

How do we do this?

Aglio Olio Pili Pili is a book that celebrates cultural integration through the food cultures of Italian native, émigré and immigré families, using both local and imported, established and unconventional, culinary techniques and ingredients. The project’s editorial productions, community events, laboratories, and related multimedia explore and reinforce the notion that the most social, intimate and lasting encounters between different cultures take place over a meal.

You spent your lives in so many countries, totally different from each other. How have these countries influenced you as a woman and influence every day your project?

Speaking for myself, the places I have lived and worked have had the greatest influence by far on my career and my style of doing things. A communications specialist, editor and writer, I have worked for universities, think tanks, governmental agencies, and companies in the U.S., Europe and Africa. I have had the tremendous opportunity to live and work in the inspiring cities of Montreal, Washington D.C., Paris, Gaborone, Kinshasa, Rome and now Bologna. All of these experiences have enabled me to see, hear and taste the world, and to develop expertise as a communications professional. The late novelist Chinua Achebe said it best: ‘The world is like a Mask dancing. If you want to see it well, you do not stand in one place.’

Through Aglio Olio Pili Pili I have found a delicious way to express my multicultural perspective and approach to life.

What is the message behind Aglio Olio Pili Pili? 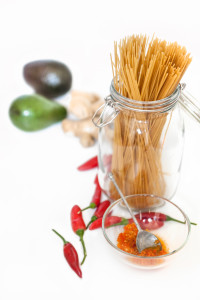 It all began with one diabolical ingredient, the habanero pepper, the main ingredient of Congo’s famous pili pili.
My husband Vincenzo and I always stocked our pantry with the ingredients for aglio olio e peperoncino— a basic Italian meal of spicy spaghetti. Thanks to my parents, we were even luckier, we always had a jar of pili pili in the refrigerator. Early on in our love story we discovered that these diabolically spicy red habaneros prepared Congolese style were no match for the dry ground peperoncino. Thus was born our signature dish, aglio olio pili pili. It is a dish which has inspired this project. Two people, one couple, the fusion of unexpected yet simply delightful and exciting ingredients, one meal bringing together three continents.

Who are the people you would to target with your message?

To date, our target audience is Italy and more specifically Emilia Romagna since our recent book, Aglio Olio Pili Pili: Cibi e culture tra origini e future si incontrano a Bologna published in Italian this year by Morellini Editore, Milano, explored all of these themes locally. We are also very present in local multicultural events like the annual Festa Multietnica in Bologna as well as other small events we organize in Bologna’s lovely piazze or in other spaces like the Erbario of Coop Alleanza 3.0 or at in The Bologna Museum of Modern Art (MAMbo).

However, I would like to extend the concept and the project to other regions of Italy. The presence of Cécile Kashetu Kyenge, Europarliamentarian and former Minister of Integration in the Italian government, and author of the preface of our book, at our official book launch in September has inspired me to begin to analyse these topics and share the message not only at the local level, but at the European and international level.

How is it possible that cooking together or eating together always unite the most different personalities? Unfortunately it is so difficult to apply it to a larger scale.

I don’t believe that sharing a meal can always unite people from very different backgrounds. But it’s important as a first step. In our recent book, along with about 30 recipes based on our feature interviews, there is also a ‘Recipe for Integration’. It is a playful addition to the book, but it has an important message about curiosity, open- mindedness and persistence in the application of any large scale integration initiative.

What is so special about Bologna, the city where you decided to live?

Bologna is a rare gem. Not only at the Italian level but broadly speaking. It is a city where different ideas co-exist and evolve. Why? That is a complex question but I would begin by saying that it is because it is home to the oldest university in Europe, it is an epicenter of innovation in terms of mechanical engineering, and it is a point of reference for its rich artistic and musical heritage. Today Bologna is known as a university town, populated with students from all over Italy and the rest of the world. As our Brazilian interviewee has noted in the book: “In Bologna there is a healthy spirit of different things co- existing in the same space which you do not see in other places in Italy.” This reality has provided fertile ground for our project.

Is it a coincidence that your life revolves around the topic “Food”, thinking about this project, the book and your UN profession?

It is no coincidence. Food is nourishment. Food is celebration. Food is love. This is what we all live for. And yes, this year I was employed by the United Nations Food and Agriculture Organisation (FAO) as a communications specialist and am happy to link themes I was introduced to there to our project, where relevant. For example, The United Nations has declared 2016 the International Year of Pulses, crops harvested solely for dry grain. For this reason we couldn’t resist making mention of pulses, especially in the context of this book’s theme: sustainable and innovative foods. Many of the dishes— both familiar and new— that we’ve encountered thanks to the Aglio Olio Pili Pili community feature these nutritious seeds as protagonists, from Fatteh bel djaj in Lebanon (chick peas), to a traditional Moros y Cristianos in Cuba (black beans) to a festive soup to ensure a prosperous new year in Brazil (lentils).

Next projects, events, ideas, collaboration you are planning with your team?

Since the publication of the book we have been busy with book launches, here in Bologna in the form of a dialogue with the presence of Cécile Kashetu Kyenge, in Verona with African Summer School, on Radio Città del Capo, at Liberia Ambasciatori, Eataly in via degli Orefici, Bologna. A few weeks ago, Aglio Olio Pili Pili made its TV debut on RAI Tg2’s show Eat Parade.

After this promotional phase, in the new year we will consider ways to expand the book or new editorial projects to an even larger audience. And of course continue to gather people together at events in Bologna, also with local partners.

At this risk of sounding like a slogan I would encourage everyone to remain curious, like a child. Also to remain human, that is to be guided by love for others, even for those we don’t know, and even if it makes us feel vulnerable, Déshabillé…

Managing a restaurant. Of love and business.

I have recently written here about how food evokes nostalgia, and how nostalgia evokes emotions. …