Hystrio is the longest running theater and performance quarterly Magazine in the Italian theatrical scene, but it has changed over time while maintaining a timeless concept. 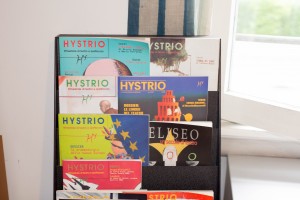 What is the key to the success of the magazine?

Claudia (director) – Hystrio dates back to 1988, making it the longest-running paper magazine on theater. Last year we celebrated 30 years and we are proud of the excellent results. We can divide the life of the magazine into two historical phases; the first starts from the foundation to the end of 1997, when its creator Ugo Ronfani was still director under the protective shield of the Ricordi publisher house for a long period of time. During that time graphics and contents were different from todays, both in format and cover. In 1998, Ricordi was sold to a multinational company that imposed cuts on certain branches of the company, including the prose sector, which included Hystrio and a series of contemporary drama plays. Ronfani, a theatrical critic of the magazine Il Giorno, tells us that she wants to cede the helm of this adventure, putting us at a crossroads  between keeping the magazine alive or ending it. We decided to continue, founding a cultural association named after the magazine. We do not receive compensation for our work because the quarterly allows us to take on other jobs to support ourselves.

The adventure was tiring but we didn’t give up. The first issue of January 1998 was the first one I signed as director at the specific request of Ronfani. I was 32 years old. We made the graphics clean, with movement compared to the previous one, full of past contents. We maintained the original structure by publishing contemporary drama texts, correspondences from abroad, reviews, and a library section but we also enriched the magazine with new insights ranging from puppet theater to a theater of diversity, and the “theatrical company” news.

After a few years we still felt the need to review the magazine’s appearance from a graphic point of view. We were inspired by Theater heute (the most prominent German theater magazine), which had very clean and essential simple layout. We then expanded our work group, growing to about 50 people from Italy and other countries, and this was one of the key aspects of our success. Even without notable economic resources, dividing the work among ourselves is sustainable for everyone and prevents fatigue. This way we can have a hundreds of reviews and multiple correspondences from abroad with those who discover and appreciate us.

Every 3 months, we agree on various topics with their support.

The key to success in general is to be inclusive, in a positive sense. We write about everyone and everything, we don’t just follow a certain type of theater, we try to have a divergent look that manages to embrace tradition but also innovation and research, dance, opera and many other possible topics, without any hesitation.

Who are the women of Hystrio, what are their paths and their passions?

The women of Hystrio are Claudia, the director, Alessia -graphics-, I, Ilaria -in the editorial office-, Valeria -organizer and administrative part-, Arianna -communications-.

Ilaria Angeloni, joined Hystrio in 2012 and always had a passion for theater. Observing how poetic theatricals are born, how they are created and also studying the organizational part, is a passion that was born many years ago. It became my reason to study this field and later turned into my profession after graduation. Before coming to Hystrio, I was an editor in other places. Here I manage the editorial staff, ensuring that all content respects the style and aesthetic characteristics of the magazine.

As a cultural association we deal with multiple activities including the Hystrio Award and organizing courses and seminars, as our goal is to spread theatrical culture. This world stimulates me and enriches me every day and this excites me to further my work. 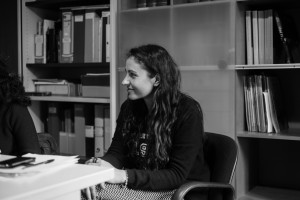 Valeria Brizzi - I approached Hystrio through a Facebook advertisement, and I have been working here since 2015. Through this opportunity I was selected for the Organizational Secretary position where I take care of the practical aspects of editing, cash flow, accountants, and finding resources for activities – a task that is particularly difficult in Italy at the moment.

Although this is a part time job, I choose to dedicate myself to cultural work. This is a constant challenge that has stimulated me, made me grow, and allowed me to be a part of Hystrio’s service. This position has helped me in my other jobs as well.

Arianna Lomolino – I approached Hystrio through a Facebook advertisement and I began working in 2016. I started as an intern for Milano in scena by Hystrio, which publishes reviews and theatrical news online. I later started to work on the website and managed all external communications such as social media.

I am learning so much and this work enriches me enormously. Theater is one of the most fair spaces in which we can move, I like to think that the written word and acting have an important function in society.

Alessia Stefanini - I have taken care of Hystrio’s graphic designs since 2007. I am a lover of the theater sector and I am also an actress at the School of Possible Theaters. I deal with packaging the final product. I started out as a graphic designer, and I love working here because theater is my primary interest. This is my only graphic design position that allows me to unite my profession and life passion, I couldn’t ask for more.

On the Italian scene, what is the role of Hystrio in the theater sector? Where is it located?

Claudia – I think this question should be asked to our readers. From my point of view, Hystrio is not only the longest running magazine, but also one of the most authoritative references for enthusiasts or theater-goers. Having a review on Hystrio, getting a book or an in-depth review, or receiving the Award is very much coveted. We have continuous requests on various fronts, from the publication of dramaturgical texts, to the presence at festivals, shows and conferences. From here, new stimulating jobs and study opportunities are born.

Hystrio has remained independent, we are a bit elusive thanks to this feature, but above all we keep a curious and open mentality to all without creating divisions. The theater is a small world which we try to inform critically. 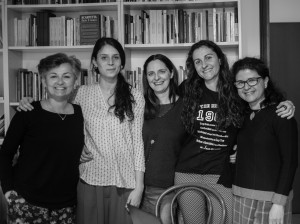 How did this network that includes more than 50 collaborators develop?

It has grown through listening, availability and curiosity in the new proposals approach.

I wait for the answers from the collaborators and I try to divide the task based on the answers. When new elements that are proposed, we listen and try to decide whether to establish collaborations or not. This method has been the key to expanding our working group. The talent of each member is identified and valued, and the time, energy and predisposition that each person has is matched.

All the editors meet annually in February to choose the winner of the Hystrio Award. About forty are permanent collaborators in addition to ten experts who collaborate on the basis of the theme.

What lies behind the Hystrio Award festival? How is the event planned and developed?

The Hystrio award is an important activity of Hystrio, it is a long-lived theatrical Award, which will celebrate 30 years next year.

It is an event where employees of Hystrio choose, category by category, the artists who have distinguished themselves or deserve recognition for the quality of their work within the year.

The categories are: Direction, Interpretation, Dramaturgy, Writing. We also have 3 special categories: Other Muses for fun-categorized theatrical professionals in a particular sector but who are the most eclectic artists. An Award is dedicated to a young emerging company, the Iceberg Award, aimed at enhancing young talents. Finally we have a special prize called Body to Body aimed at body language for a very broad sense of dance.

The other part of the Award focuses on young actors, writers and companies following talent scouting.

Every year a call for contenders goes out in January for dramatic actors under 30 and writers under 35.

This year 224 actors and 106 playwrights have signed up. This implies a significant amount of work as all these young people will be undergo a thorough audition that Claudia Canella and I will hold. From this stage we will select 40 participants.

The 106 anonymous plays that arrive in the newsroom are read by a commission composed of 12 collaborators. After reading through them, we will select a dozen, and the winner will be announced on the last day of the event, June 10th.

The Hystrio Award will take place on June 8/9/10 at the Elfo Puccini theater, corso Buenos Aires 33, in Milan

Valeria - The pre-selected 40 finalist actors will attend the 3-day event, and they will be discussed and heard by a jury of professionals, theater directors, and important artistic groups. Auditions will take place in the morning and afternoon of June 8th and 9th, ending with an evening show.

Instead, the winning play will be presented by a Director and cast of professionals as the first show. On the following evening we will have a show from the previous year’s winning company. Finally on June 10th the 2 young finalists will emerge with a third youngster: who will get the Hystrio Award will get access to scholarships.

To achieve all this, an organizational and communicative machine is needed which starts months before, times is fundamental so we also employ a team of 4 interns.

The event brings together not only the public, experts, and winners, but also many young people and theater lovers, so the atmosphere during the awards ceremony is open and festive.

The theater has the aim to create a link between what happens on stage and the audience, without this aspect there is no reason to call it theater or even exist.

Our ambition is to continue in this direction, open and projected towards the world.

The day I told myself: “I am an artist”.

“As you can see, there have been many changes in my life in the last …