DM: Hello guys, we are very happy to get to know you better… let’s start from the first question, who are you, Bruce and Glen Proctor?

BG: We are fashion designers! Fashion design has been our main focus for a while and the driving factor of our life but when we became members of the Rock Church our focus shifted and we realized that fashion was not everything. Fashion was a catalyst and a platform that God was using to preach the Gospel in a very untraditional way. 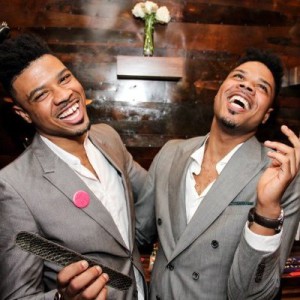 DM: How did you become fashion designers? We would like to know more about your story.

BG: In Junior high school we were part of a singing group, we needed to raise funds through a fashion show in order to get more studio time for our boyband. We were always drawing, we were natural artists because our father was an artist. We happened to draw clothes a lot, but we did not recognized it as a desire to be fashion designers or to be the next Marc Jacob. When the time came for us to raise funds in DC for our fashion show, it turned out to be really successful!

Then, our aunt came to us and said: “Listen, are you guys trying to become singers? Well, you are not gonna make it. Stop singing, she said. But this fashion thing, maybe could go somewhere.” So, we realized how much we loved fashion and therefore we went to school for it. Bruce went to a Fashion Design School and I attended a school for Fashion Merchandising and Marketing.

DM: Oh, that is the good thing of being twins. You can split!

BG: Exactly, so he had one piece of the business and I had to deal with the other half, then we put together our knowledge and BOOM! In college we had an interview for an internship at Beyoncé’s House of Dereon, and we worked there, the first company split from the umbrella company we were working with. The second one wanted to hire us to create a line called American Rag Cie sold at Macy’s here in the US. Since we could not afford to go back to school, we accepted the job and we moved to NYC with a very low salary. We moved to our own apartment and the only thing we were having at the time were Ramen noodles, really cheap food, the stuff you eat when you don’t have money! From there, we happily moved up in the fashion industry. We earned a higher salary: we worked for Sean Jean where we designed the women’s line, we worked for Nelly, we launched a line for Treyz Songs called Treyz’s Angels and we also designed for Mark Eco.

After that, as freelance designers, we started collaborating on a project with Tommy Hilfiger, we also created the accessories for Nicki Minaj. Then, we gave birth to our accessories brand, Bruce & Glen slapsticks promoted for two years in different events and shows. Luckily, several celebrities craved for these slapsticks… We were just meeting the celebrities at these shows, saying: “Can I slap you with this slapstick? You’ve just got slapped, I’m gonna slap you so good that your mama is going to feel it!”… And then the joke continued.

DM: What about now? What are you doing?

BG: Now we just go on designing the bags; last spring we did a ready-to-wear collection, our focus is mainly on accessories and television, like our Streetstyle Wow Show which you can find on YouTube. In the future we would love to produce a new show. 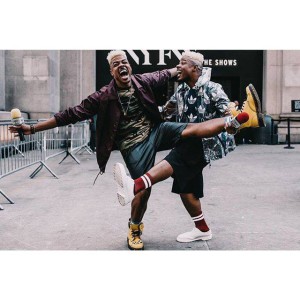 DM: What about Fashion in New York?

BG: New York is the fashion capital of the world. You can spend a whole day sitting in the right area of the city just people-watching, everybody is so unique and so creative. There are no rules in NYC, you could come from a place like Idaho and walk with your pants inside-out. Probably in Idaho people would think that you are weird but here you would be just another plus one. There are so many people who express themselves in such an extravagant way, you feel free to try anything, that is what makes New York so special. No one thinks that you are crazy. The fashion in New York challenges us to think outside of the box, that is why we are so glad that we have a church in NYC, where people are willing to accept new things like preachers with pink or blue hair.

DM: Where do you see yourself in the next years?

BG: When we were young we were attending our mother’s church, there was a man who was visiting the church and his name was Prophet Mike. He came to us one day and told us 3 things: first of all he said specifically that we should take care and watch out one for each other, his exact words were “You are your brother’s keeper”. Then, he also said that school was not everything. At that point we were still in school and unfortunately after that semester we had to drop the school, so that was the moment we realized why he was saying that. He did not know that we had to dropped out the school but he just felt to say this to us. Eventually, he also said that we would have been preachers and that we were going to have an entertainment empire.

“Oh, my goodness, this sounds nice!” was our comment even though at that time nothing he said made sense to us 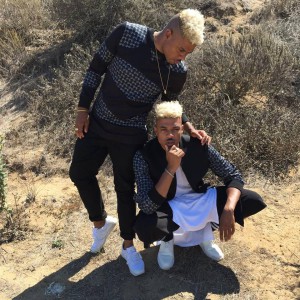 because we did not know we would have become fashion designers or preachers. Today, we realize what God was saying, in the next years we plan to be on our way with our entertainment empire. We want a line that we can sell, we want to hit the television and invent a Bruce & Glen cartoon as superheroes that save the day, we want to build a lifestyle brand. Our brand is conceived to spread joy.

I believe that people need joy, because the Bible says that “the joy of the Lord is your strength”. When people get happy, there is a strength that comes from God that empowers them to do things perceived as impossible.

DM: What obstacles have you met in your life?

BG: We faced one of the biggest obstacles for us 3 years ago when we lost our mother. It was due to lung cancer, for most of her life she was a smoker. The challenging part for us was that we are a Church that believes in miracles and we pray to heal people, we have actually healed people. But when we prayed for our mother and she was not healed, you know, that was a huge moment of testing our faith and our trust in God. It is so crazy because as I am talking to you about my mum, someone just came inside the cafe where we are right now wearing the same perfume my mom used to use.

Ethereal, fantastical and delicate… these three words may identify but not limit the artist …

Minja Tarle is a designer who chases the artistic approach in designing everyday women accessories. See her …