“Everything is my canvas” L.S.

How does a lawyer end up collaborating with Beyoncé, Belvedere Vodka, Starbucks and Bulgari? This is the incredible story of Laolu Senbajo, a versatile artist who was born in Nigeria and came to New York to seek his fortune.

By now Laolu is well-known all over the world, but the story about how he moved to New York is impressive: we met him by chance walking in downtown Manhattan, we spotted his gallery and he was so nice to welcome us the next day to have a chat!

Because the father was also a lawyer, at the beginning he had to pursue the same career, as the senior legal officer for Nigeria’s National Human Rights Commission. The truth is that he always wanted to follow his natural vocation. Against all odds, he opened his Art Gallery in Abuja, Nigeria, and some years later finally moved to New York and play all his cards. It was not easy, it was hard getting to the end of the month, trying to find the right gig, persevere without falling apart, until one day everything changed.

The oríkì, Oríkì, or praise poetry, is a cultural phenomenon amongst Yoruba- speakers of West Africa. Varies in length, depending on whether it is the name given to a child to describe the future portents of the life or a recital of the accomplishments of a person’s clan. It is invoked to praise a child for bringing pride to the parents or to attempt to evoke virtuous character traits of bravery, fortitude and perseverance that are believed to be innate in a person by pedigree.

Laolu, tells us about the importance of knowing our roots. Who were we before colonialism? What was our culture and religion? He stressed the concept of how speaking your native language is a great part of  identity and culture.

“Oriki is a song of praise that my grandma used to sang me, something about your identity that tells you about where you are from, who are your forefathers and foremothers, what you are known for, what your family takes pride in. Just to remember who you are.

On a day you feel lonely or feel sad, you are reminded of who you are and face the world. It’s like a reassurance that will make you act with strength and believe in yourself.”

‘Ori’ in Yoruba means your essence, your soul.

Among several collaborations, naming Nike, Alicia Keys, Seun Kuti, Equinox Fitness, Laolu took care of the artistic part of Beyoncé’s album Lemonade, by painting his “Sacred Art of the Ori” on her dancers’ bodies. Queen Bee’s album Lemonade is a celebration of African culture and, you will notice that Nigerian influences are very intense. We do believe this encounter was meant to be hence we jumped to the occasion in order to know more about his contribution, Beyoncé the artist and more about the essence of this collaboration.

“This collaboration was actually refreshing. I was impressed by discovering how much she loves art and respect artists. She is a big fan of my work and that was a “wow” for me. For a person like her not only to invest and believe in my work but also make sure I succeeded.

I meet a lot of people everyday and its priceless being invited to work with a person that is so respectful, kind and real: she thanked me throughout, she never took my time for granted and always gave me credit, she never forced me to do anything. Instead, she used to ask me ”What do you want to create with this music?.
Everybody is on the A-game and she makes you feel like you are too. It was just an honor to work with her: she doesn’t play and I don’t like to play with my art neither, for this, she gained my respect.”

Know your culture and spread its glory.

Everything about the album Lemonade is about messages and there are loads of hidden messages, especially a lot of Yoruba influences.

“I did not know how deep she was into Yoruba mythology until I met her and we finally spoke. I was blown away. She had a lot of knowledge about Yoruba mythology and Yoruba religion, which I did not even know it existed in Louisiana.
You come to America and you think people don’t know anything about it and then you discover that through the transatlantic slave trade the culture travelled, strived and survived. The slaves preserved it because it was the only thing they had left. So, you come to realize that there are places like New York, Louisiana, Cuba, Brazil and it is mind blowing knowing that people kept this language for over 400 years.” 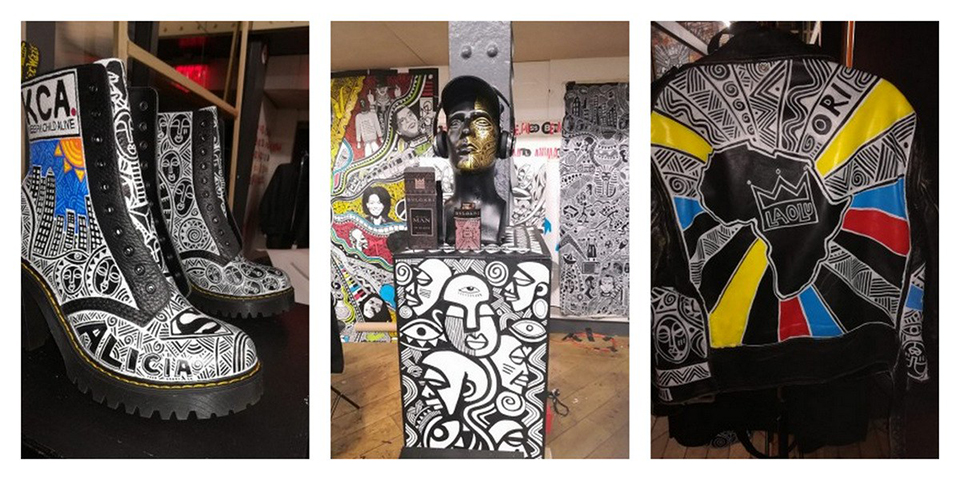 I really take my art very seriously and my messaging is very important to me.

As you observe very carefully his paintings you will notice multiple lines. Each line is a path to a story Laolu is telling you. Multiple stories in one incredible piece of art and as he is there in front of you and explain what is behind every single detail and icon, your brain will start working faster and faster to keep up… That’s learning, that’s absorbing his truth, his wisdom. An artist is not only an artisan but a master in storytelling and, probably, also a wise person. The more you look the more hidden icons you will see. Laolu’s art has often Yoruba mythology and Yoruba deities in it.

“In my paintings I use lines to take you on a journey. I integrate concepts and ideas of philosophy. I want people to see my art, make questions and reflect. Life is about learning, when you learn things your perception changes, and this is what I want to do with my work… to reveal, make you see some things today, come back tomorrow and you will see something completely different.”

Take a look at the short clip to go deep on this topic, if you want him to explain his piece called dreamscape.

Laolu is another example of how perseverance and talent walk hand by hand, neither of them has much value by itself. Can you prove us wrong?

In these days, where masks and walls weaken our sense of belonging to a …

Luis Fernando Araujo Silva   Date and place of birth Brasilia, January 25 When did …