The Two sides of Cambodia by Celinne

After two weeks of volunteering in the slums of Phnom Penh, I’ve come to realize that Cambodia is so much more than the backpacker hotspot it’s advertised as to the outside world. In the past few years, tourism in Cambodia has been on the rise following the country’s (relative) stability and growth, yet living amongst the locals for 2 weeks taught me that, other than where to visit and what to see, many foreigners don’t know much about the country.

Cambodia is a complex place that houses as much beauty as it does hardship. One side, the one most exposed to visitors, boasts hundreds of years of rich history, breathtaking natural wonders, and the food, tradition, and culture eccentricities that make Southeast Asia so unique. The other side, shielded by the glitz of the tourist industry and only revealed to those who look, is much less glamorous: though it is growing, Cambodia continues to be a country ridden by poverty, political turmoil and a dark history.

Perhaps precisely due to its multifaceted nature, Cambodia is a fascinating country to visit for those looking for adventure, natural beauty, and a humbling lesson on the human condition. Here is what you need to know if you are planning on heading to Cambodia:

Despite its current impoverished state, Cambodia is a beautiful, dynamic, and overall worthwhile place to visit

When visiting, there’s unfortunately no way to ignore the fact that Cambodia is one of the poorest and most corrupt countries in the world: approximately 20% of Cambodia lives under the poverty line, meaning many people survive on less that $1.25 per day. Despite the lamentable economical situation, Cambodians are friendly and welcoming people once you get to know them. Though there is definitely a strong language barrier since most don’t speak fluent English, I didn’t mind: I found it challenging yet fun to communicate with locals via gesticulations, smiles, and rough sketches. So long as you are open to communicating and learning from others, there is a way!

Cambodia is also an economical place to visit for most foreigners, especially Westeners. The cost of living is very low – I could comfortably eat, take tuk tuks (the main method of transportation), and tour sites for $10-$15 a day. The markets, which can be found in abundance around any tourist-friendly area, boast a variety of lovely and cheap souvenirs ranging from the highly popular “elephant pants” (harem pants with adorable elephant patterns on them) to beautifully painted serving dishes made out of coconut shells. Remember to always negotiate down at least 70% the initial asking price! Though Cambodians love to bargain, keep in mind that a couple of extra dollars may not be a lot for you, but is worth a few meals to many of them.

Visitors are drawn to Cambodia’s breathtaking beauty, yet far too many are unfamiliar with the recent traumatic history that has shaped the country’s current state of affairs. During the early 1970’s, the communist ruling party – the Khmer Rouge – brutally murdered approximately ¼ of the country’s population. Led by totalitarian dictator Pol Pot, the regime is responsible for unspeakably brutal, inhumane acts on millions of innocent Cambodian people, including torture, cold-blooded murder of women and children, and submitting the entire population to strenuous working conditions and famine.

Considering the current broken state of the country, it’s strange to think of Cambodia as powerful empire that ruled over most of mainland Southeast Asia from the 9th to 15th centuries. Easily forgotten by foreigners and too often trumped by the residual trauma of the Khmer Rouge, the achievements and incredibly rich history of the Khmer Hindu-Buddhist Empire are prized by the Cambodian people. The country’s most important (and famous) legacy is the Angkor temple complex in Siem Reap, which served as the capital region at the peak of the Khmer Empire’s glory.

Angkor, and all of the majestic temples that populate it, is testimony to the country’s past power, wealth, culture, and architectural prowess. Though what is left now are rapidly eroding ruins, each of these temples tell a rich story of what was once a global urban center. It is very clear to me from my time here that to Cambodians, Angkor is more than proof of the country’s greatness – it is a symbol of hope. Angkor represents Cambodia’s potential for growth and a return to prosperity. Its global fame is also a pivotal source of pride for its people. So much, in fact, that the main temple – Angkor Wat – is featured on the country’s flag. Angkor consistently makes major travel sites’ shortlists as one of the top places to visit in the world (it was voted #1 by Lonely Planet this year), bringing in millions of tourists every year.

Some unconventional tips before going 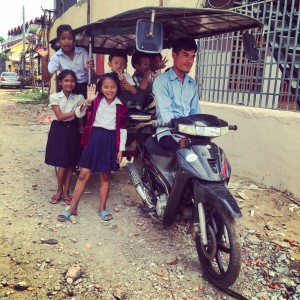 It’s fascinating to think about how different this mentality is from Westeners’. We spend so much time thinking about the future, perhaps because we can afford to. My time in Cambodia has reminded me of how many of the mindsets we take for granted are actually a luxury: not having a religion to hold on to for faith, being able to care for our children, even little things like being vegetarian or eating healthily. There is so much we don’t realize we are allowed to do just because we have a little bit more than most of the world. We find happiness in the prospects of a future, while less fortunate communities seek it in the reality of their present day. Which is better? It’s hard to say. But I’ll admit, I’d rather find happiness in my reality than in a future that does not yet exist.

Celinne spent two weeks teaching English at an orphanage in Phnom Penh, Cambodia. For more on her experience with the country, as well as more stories on her travels around the world, visit her blog at: thenomadsoasis.tumblr.com.

Fresh off a trip to Vienna, three words resound in my head: what …