He started his professional adventure with the best statement ever:

Born in Munich in the 1988 and started as a Stylist for Philipp Plein.

He started his professional adventure as a fashion stylist with the best statement ever: “YES, I CAN DO IT”. Even though it was a new experience for him, he is convinced of the fact that you must be able to sell yourself even when you are not able to do something, and just GO FOR IT.

He started with Philip Plein, and from there the people and the press started to notice him, by taking pictures and talking about him. He has worked with Naomi Campbell in Ibiza, the Russian Vogue, Vanity Fair, and Glamour in Russia. He has prepared several campaigns for jewels and perfumes, and also provides styling services in Cannes for L’Oreal during the Film Festival event.

Furthermore, he has worked for Penelope Cruz and her sister Monica, to prepare them for the red carpet.

Of course, social networks played a big part on his success, people are always interested in which party you are going to, and which people you are hanging out with; you always have to keep the public informed and keep the magic alive.

In comparison to other stylists who start as Magazine editors, he started by styling models at events. For Sam, styling is not something you can learn; it’s a talent, something you do with passion and that needs inspiration. You have to combine the magic of the creation of the designer with the personality of the celebrity you work for.

In 2012 he opened his shop, Kult by Samuel Sohebi. The dresses he sells are purchased personally by him from around the world, especially from Italy (Bologna, Florence, Milan) and famous designers. Samuel cares not only about the quality or the brand of the dress, but about the aesthetics.

He realizes that not every woman can afford a designer dress since they can be expensive, but also, since every woman does not have the size of a model, he tries to mix and create a combination of the most beautiful dresses, taking into consideration that every woman needs to feel like a princess but in her own skin. There is no pressure to sell, every client must feel free and feel at home.

Something that always surprises him is when some famous women in the fashion or showbiz industry ask for his opinion on their look, and the best compliment for him is when clients come back to tell him about the event, show him pictures of the dress, how well it fit, and how satisfied they were.

What is the difference between a styling job for a magazine and a celebrity?

“In the first case, there is a story to tell the public, while in the second case, you dress a woman that wants to look and feel sexy. She wants to be the star under the spotlight and her goal is to get into the magazine or blogs in the best way possible. In order to do a great job as a stylist on the red carpet you have to study the trends of the moments, you need to know who is the designer of the moment.”

What are the difficulties of this job?

“Attitudes. A lot of attitudes are not coming from models or celebrities, as you could imagine, but from the staff, managers, photographers, who in some cases don’t know anything about fashion.”

Fashion in Europe and USA:

“I will like to move to New York to work as an intern for Vogue. I wouldn’t mind starting from scratch by doing trivial things like delivering coffee and making copies as long as I am doing what I love and taking steps to get where I want to be. In Germany fashion faces hard times. Sometimes you feel there is no progress like everything is moving in circles, and this is the unpleasant sensation I feel every time I come back from Milan or Cannes. In America it’s totally different, there is a lot going on and coming out and as a young man I know that professionally I can really grow up fast.”

WATCHING, LAUGHING AND TALKING ABOUT SOME OF SAM’S PICTURES:

This photo depics Sam, his brother and two of his best friends headed to a sale event for the shop. It’s an unusual photo in Munich, where women love to be fashionable but it s more difficult to see guys walking like this along the street. The pic was taken with a simple phone but looks great and it captures a great moment for Sam. 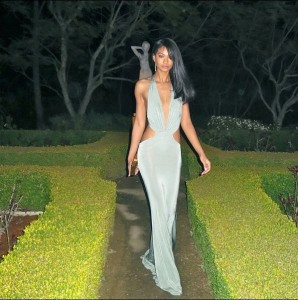 They met each other at Elie Saab backstage in Cannes back in the 2009; Sam went to Iman because he noticed her cool tattoo on her back, from there they started talking and exchanged contacts to be friends. Sometimes Sam brings her dresses, she is really an easygoing and simple person. The dress she is wearing is from a Prêt-à-Porter dress (Versace).

Samuel on a catwalk

We jump back to 2009, the first year of life of the shop Kult by Samuel Sohebi and his 24th Birthday. He decided to launch this event, and while organizing by himself for the first time in his life, he realized how difficult it is to prepare an event for 600 guests, and manage the staff including photographers, models, and the press. But he took this event as an investment to let people know him, his job, his passion, and his shop, and you know how social networks of course do the rest by sharing the event, pictures, tags, hashtags, that is the way people get to know you faster and search for your name around… who is this guy? Just click on it. 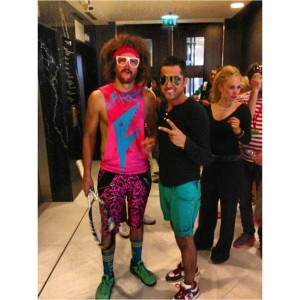 The pic was shot in Cannes in 2013. It was 10 am on a beautiful sunny day and probably Redfoo from LMFAO partied all night long in the same distinct and colorful outfit, and as he was not interested in sleeping, he decided to look around for someone to play tennis with. Guess what? Sam is always in the right place in the right moment, you know that thing called… TIMING! Even though he was not able to play the game, he always finds a way to be over the top. And by the way, who would say no to LMFAO?

The name of his dog has a reason!

Once, he worked for P. Diddy during an event promoting his perfume UNFORGIVABLE cologne by Sean John and the White Party, which took place at Nikki Beach in Saint Tropez. He remembered how P. Diddy’s family members were all absolutely nice to him; with his mother being the funniest woman in the world, and P. Diddy himself being one of the coolest party people ever. While Sam was having the best working experience of his life, the only person that was repeatedly rude to him without reason was the guy holding P. Diddy’s umbrella. His name was Mr. Bentley, that’s why he decided to Name his dog after him!

How did he get this job?

It was faith; Sam was in Saint Tropez when he met a guy he knew from the US who was kind of desperate because the stylist he wanted for the event was sick. He needed a replacement, so he just asked Sam if he knew a good stylist? SERIOUSLY?

At this point, we all know that Sam tends to have perfect timing, so he just suggested himself, and took the chance to show what his mama gave him! In every game played something unexpected always pops up, and in Sam’s case, he was able to meet Kim Kardashian and Paris Hilton and received the chance to work with them. 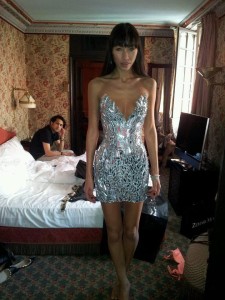 This shot was taken in the room of Costes Hotel in Paris. It was a dress fitting for Alessandra Ambrosio and Sam needed to find a model the same sizes as her to see if the dress would fit her well.

In this picture you can see everything; Sam in the back, tired and doubtful about whether the client would like his choice or not, the model in front of the mirror, and last but not least, a dog, fearless of what is happening in the lives of the people there, as he hatches happily out of the window.

Alessandra Ambrosio loved the dress and we can totally understand why.

This pic was shot at a Chanel event at Gran Palais. Sam designed the white fur bag is grabbing in the pic, André Leon came to him to ask who was the designer of the bag and Sam was surprised to receive his attention. For Sam, André is a really good advisor when it comes to the professional life. 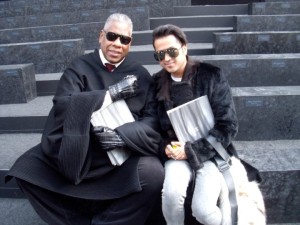 19th October, meet us at Lumiere London – Look @ Me Event Déshabillé Magazine has …

On Saturday December 8th, the “Final of Chefs of tomorrow” competition was held during the …

Our project comes from the desire of a new team to test itself. We are …