Kreativ Wedding is made with love. Love is fire- branded in their logo, such is their credo. And when something is conducted with passion, the outcome can be nothing else than perfect. 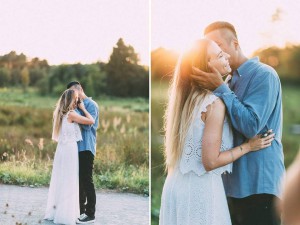 Anne Aselmann is a photographer, and Riccardo Fasoli is a videographer, but defining them as such is reductive. When I met them for the first time, I saw in their eyes the passion for their work, an open flame that in any context truly makes a difference.

“It all occurred by chance, we felt chosen by the “wedding universe”.  We would have never thought that this could be our final working environment.”

Anne is a designer and a passionate photographer established from her university background. Riccardo on the other hand was a former eyeglass designer with different hobbies; ranging from design, technology, to storytelling. Both were invited to a friend’s wedding in 2011 and there it was; destiny indicated them the way.

“Anne and I went there equipped as common guests with a simple handycam and a reflex. Once back home, we looked at the content we created; a small photo gallery and a short video of the day. The bride’s response was unexpected; she told us that the pictures were much better than the ones made by the photographer they hired and so they wanted our pictures as official pictures for their albums. She watched the video at least 3 times before being able to watch it without crying. 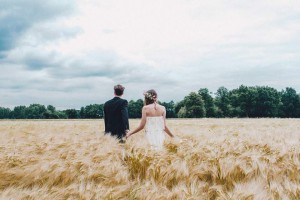 The quality of the content we gave her was far from what we are able to produce today, but that experience gave us the incentive to try, and in 2012 we were the official team for 2 friends’ weddings; that offered us the opportunity to launch ourselves and we were recruited by 35 couples in 2013 and 64 couples in 2014. Altogether we received 1000 demands in 2014.”

Kreativ Wedding has been recruited in Thailand, Hong Kong and Caraibi, adding more wedding reports to the ones produced in Germany, not so far from their residence home in Dusseldorf. Thanks to their style, the romantic shoots from Anne − a beautiful and charming woman that captures not only seconds but emotions – and the videos created by Riccardo, the emphasis is not only on a wedding celebration but in the union of two soul mates that meet and become one. Pure poetry narrated in a timeless allure.

The work they do is intense, full of dedication and commitment.

“Being a photographer at a wedding is not easy. You are involved in one of the most important days of a person’s life, and even if you don’t belong to that day you become one of the closest people, and bear testimony of their most intimate moment…We have to be ready to catch a lot of aspects and emotions: hugs, laughs, smiles, tears, kisses… our style in filming and photographing is not a classic one but we maintain a photojournalistic footprint; you will never hear from us say “ehy, watch here or there, stand there and smile”, instead we try to be attentive, and  invisible among the crowd with the utmost discretion. A lost moment is lost and that it is.

Our pictures are made of real moments; they must have an analogic appearance, not digital, even though they come out from a DSLR. The videos must tell a story in a cinematographic way, like a movie. Riccardo loves creating films, and that feeling of “butterflies in the stomach” wins when the mix between music and the scene get to the perfect union, meanwhile Anne loves it when she is able to immortalize the couple in that harmony, “where the world feels it’s like only you and me”.

“We do love our jobs because we are surrounded by happy people, we love the reactions of our couples when we deliver our product, but most of all we love the idea that our product will be alive throughout the years.”

If you are about to marry, you should definitely try Kreativ Wedding and be ready with plenty of Kleenex!

We would love to introduce a power couple, Eileen and Pierre, a thrilling duo located …

So here you leave everything in the past. All years of hard work behind you …